Review of the iPhone 14 Lineup 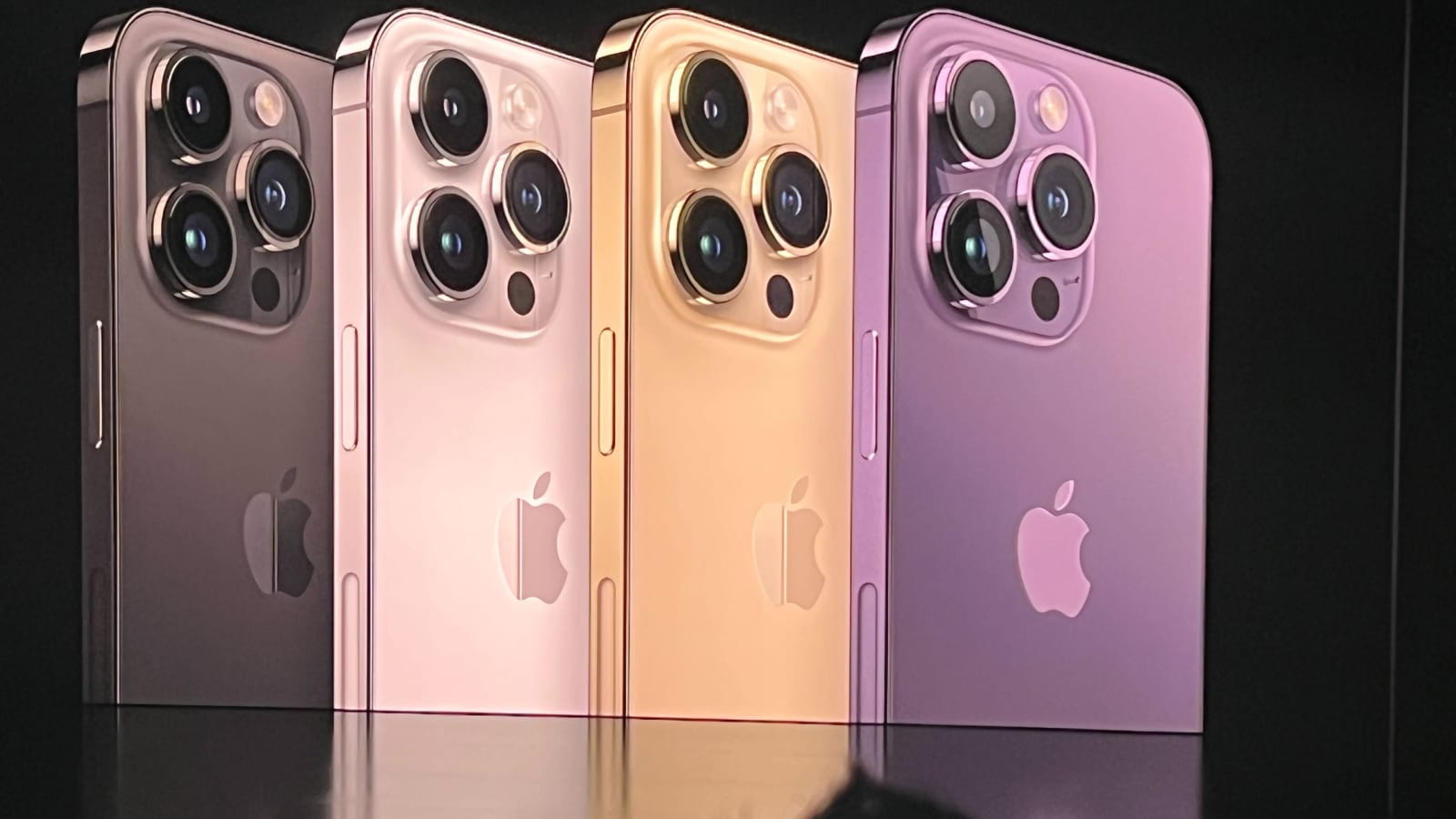 In an ever-expanding sea of smartphones—some illogically cheap and others boasting of mind-boggling tech—Apple still manages to claim a seat at the pinnacle of the industry. Why?

IPhones have a rapport for their premium hardware designed to last, cutting-edge features that just work, and an unparalleled customer-oriented approach. All these values that make people fall in love with Apple are reflected in their latest iteration of iPhones; iPhone 14, iPhone 14 Plus, iPhone 14 Pro, and iPhone 14 Pro Max.

The iPhone 14 series borrows everything that was great about last year’s iPhone 13 lineup and takes it up a notch (pun intended).

If top-of-the-line cameras and unyielding performance wrapped up in a gorgeous body are your ideas for a great phone, the iPhone 14 lineup is a no-brainer. The question is: Which of the iPhone 14’s is your perfect companion?

Read on for our review of Apple’s latest flagship smartphones (Hint: There’s more to the devices than what’s on paper).

First things first, what’s on paper? Here are the official specs of the 2022 iPhone 14 series:

The published spec sheet aside, how do all the nifty perks translate to the consumer? Are the new camera features worthwhile? How practical is the ‘ground-breaking’ dynamic island? Here’s a breakdown of what the iPhone 14 packs outside and under the hood based on an in-depth analysis of hands-on reviews:

Design – Out with Notch, In With the Island

If you’ve had the opportunity to grab hold of the iPhone 13, expect the same feel with 2022’s iPhone 14—at least body-wise. The dimensions and even the screen are identical—with most of the tuning happening on the inside.

While the iPhone 14 and iPhone 14 Plus (expected to be released on October 07) have relatively uninspiring designs, the Pro models are the exact opposite. For the first time since the 2017 iPhone X, the team at Cupertino has finally made the bold of reinventing the trademark notch.

The iPhone 14 Pro and iPhone 14 Pro Max displays feature a pill-shaped cutout dubbed the “Dynamic Island.” While the name attracted its fair share of memes, the Dynamic Island may prove to be a gem. It’s a creative way to refresh the iconic notch by turning it into a more practical tool that improves the user experience.

The Dynamic Island functions like an adaptive blob that stretches, contracts, and even changes shape as needed. Its elegant feel and functionality make it one of Apple’s most significant design upgrades in recent years. The island takes multitasking up a notch by allowing you to dock an app and revisit it with a quick tap.

And as you’d expect from Apple, the animations are silky smooth and subtle. But some users have identified some rough spots such as uncharacteristic cropping of things like timers. It’s one of those features that gradually grow on you until you can’t imagine a life without them

While Dynamic Island is attracting most of the plaudits, Apple managed to sneak in a useful feature that may end up saving you a couple of bucks. You can now replace the back glass without going through the expensive hassle of disassembling the phone. Even better, you don’t need to remove the True Depth Camera module to replace the display. Talking of display…

To the disappointment of fans, Apple maintained a 60Hz display for the iPhone 14 and iPhone 14 Plus models—a refresh rate that is relatively outdated among high-end smartphones. Besides that, the entire lineup delivers crisp OLED screens with Dolby Vision and HDR10 technology.

Following the same trend with the design, Apple reserved the best display features for the Pro models. The iPhone 14 Pro and iPhone 14 Pro Max boast LTPO OLED screens with a 120Hz refresh rate. Coupled with the Dynamic Island and a bumped-up camera (more on this in the next section), emerging reports by market analysts suggest the Pro models are racking up higher demand to the point that Apple may be doubling down on their production.

The Pro models also ship with an Always-On display turned on. If you’ve used an Apple watch, you might be familiar with how this feature works. Always-On dims the screen to about 10% and chops the refresh rate up to 1Hz. This gives you a constant sneak peek of time and notifications without significantly hogging your battery. It’s a feature that may take some getting used—with online search results showing a spike in people looking to toggle the feature on-off.

It’s also worth mentioning that the Pro models pack an impressive 2000nits of peak brightness—compared to the 1200nits in the 14 and 14 Plus. The extra nits may not matter much in normal usage, but they might come in handy when you need a clear view of your phone in bright light.

Camera – Bumped Up, But Bumpy

You’ll also find Action Mode, which stabilizes images when you move the camera around a lot. Though you have to sacrifice resolution from 4k to 2.8k – a small price to pay for quality videos.

In terms of the selfie cameras, they all get an upgrade with autofocus (finally) and a wider aperture of f/1.9. Video calls and portrait shots are about to be better than they’ve ever been.

While all devices in the 2022 lineup offer impressive camera output that’s on par with the best smartphones out there, the Pro models take the limelight.

The iPhone 14 and 14 Plus comes with the familiar dual rear camera setup with a 12MP main camera. This is the same resolution as their predecessors, the iPhone 13—but with an upgrade in aperture from f/1.6 to f/1.5.

And if you thought iPhone cameras were good at 12MP, wait until you catch a whiff of the 48MP sensor on the Pro models? On top of the larger sensor (around 65% larger than the iPhone 13 Pro), the Pro models also feature a 12MP telephoto sensor that allows 3X optical zoom, a 12MP ultra-wide sensor with a wider aperture, and ProRES for 48MP raw shots.

This is all great news for the photographers and filmmakers in us. Most camera test show improved color rendition, more light gathering, and faster focusing. But all this goodness comes with a caveat: a bigger camera bump.

If the wonky feel of the iPhone 13 Pro was a concern for you, wait until you place the iPhone 14 Pros on a table. Sure, it’s highly unlikely that the wobble will be a deal breaker—but it’s hard to ignore the risk of accidental falls on slanted surfaces. When this is the case (*another pun), we got your back with our top-of-the-line iPhone 14 screen protectors to safeguard your precious device.

To widen the gap between the Base and Pro models, Apple decided to reuse last year’s A15 Bionic chip in the iPhone 14 and 14 Plus—only reserving the cutting-edge A16 Bionic for the 14 Pro and 14 Pro Max.

The A15 Bionic is already some steps ahead of most competitors, so it should still suffice. But if you want the best in processing power—especially for long-term use—the A16 Bionic packed in the Pro models is a great choice.

What Does the eSIM Spell for You?

Another major change to the iPhone lineup is the contentious idea to ditch the physical SIM card tray in favor of an eSim—at least in the U.S., This move is so far divisive among consumers.

Some users argue that the idea to ‘force’ the eSIM-only iPhone 14s is an anti-consumer approach that is uncharacteristic of Apple. There’s also the frustration of hiccups when transferring your phone number from an old device to the iPhone 14. Not to mention the privacy risk from waiving the option to remove the physical SIM card.

But for most people, setting up your new iPhone and switching between carriers should be a breeze. It might even be smoother and more seamless than the conventional way with physical SIMs.

Safety first! SOS over satellite and crash detection are two features that are not necessarily in the spotlight as far as early iPhone 14 impressions are concerned. But they could mean the world to some users when their lives are at stake.

The crash detection feature basically works by using advanced sensors to identify a car crash before dialing emergency services and notifying them of your location for help. If sending an emergency message is not possible due to signal issues, the iPhone 14 will use satellite.

Interestingly, the base iPhone 14 packs a larger battery than the iPhone 14 Pro. But this does not translate to better battery life. With a more efficient A16 Bionic chipset and the adaptive ProMotion display, the Pro model may slightly edge past the iPhone 14. But all this depends on your real-world usage.

Either way, Apple claims you can recharge your device to 50% in 30 minutes using their fast charging adapter or 15W MagSafe charging. Time will tell how this holds up.

Specs and neat features aside, sometimes the buying decision comes down to the phone’s aesthetic. The iPhone 14 and 14 Plus are available in Midnight, Starlight, Blue, Purple, and (PRODUCT) Red. The Pro models ship with fewer color options—but eye-catching ones nonetheless. They include Space Black, Silver, Gold, and Deep Purple.

We feel Deep Purple will be a fan favorite and a top candidate for users who prefer transparent cases. The Space Black is a nice shade for those of you who prefer something dialed down. It’s slightly darker than last year’s Graphite shade.

With the 120Hz display, the Dynamic Island, a 48MP camera, and the A16 Bionic chip, all signs point to the iPhone 14 Pro models. They are a few drawbacks like the wobbly camera bump and lack of a USB-C connector, but they are mostly negligible. But regardless of your pick, this year’s iPhone lineup offers great value for money.

And when you upgrade to the latest iPhone, ensure you enjoy your device for as long as possible by installing a glass screen protector from Tech Amor. We have reliable and easy-to-install iPhone 14, iPhone 14 Plus, iPhone Pro, and iPhone 14 Pro Max screen protectors. Plus, a handful of accessories such as cleaning kits, car mounts, and premium cables.